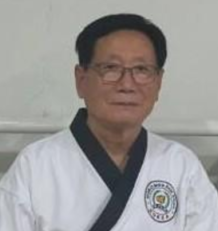 This article tells the story of Dr. Kim Hui Young, Sa Bom Nim (김희영) (Dan Bon: 4861) who lost Moo Duk Kwan after returning from Military Service after the unification of Tae Kwon Do and happened to find it again after nearly 50 years.

Until the end of the Korean War, the Japanese Imperial Army occupied Korea from 1914 to August  1945.  During this time, the Japanese attempted to eliminate all Korean culture and force the adoption of their own.  This was a sad time for the Koreans as almost all Korean heritage including Korean Martial Arts were lost or destroyed.

However, after the Japanese Occupation, five Korean Martial kwans (schools) emerged of which Moo Duk Kwan, founded by Hwang Kee on November 9th, 1945, was the undoubtedly the largest and most famous for teaching Tang Soo Do.  Unfortunately, during  Moo Duk Kwan's peak, as a result of the Korean Military Coup led by General Park Chung Hee on May 16th, 1961, attempted to unify all Korean kwans of which Founder Hwang Kee did not participate. This resulted in the birth of Tae Kwon Do and the fall of Moo Duk Kwan in Korea.

Due to political pressures, many Moo Duk Kwan instructors lost their recognition to teach and had little choice but to join Tae Kwon Do in order to put food on their tables. Founder Hwang Kee endured many years of hardship and even had to fight and won all the way to Korea's Supreme Court to preserve Moo Duk Kwan registered as the Korea Soo Bahk Do Association.

Dr. Kim, Hui Young was born in Seoul, Korea on January 2nd, 1941 right before the end of the World War II and trained at the Young San Do Jang where they shared space with Judo practitioners.  He trained under Kim Jae Joon (김재준) (Dan Bon: 38) and received his Cho Dan in 1961.

During his days of training, Dr. Kim loved all aspects of Moo Duk Kwan practice.  However, when asked for his favorite , there was no hesitation: fighting  / dae ryun (대련), especially two against one.

Back in the 60's there was no concept of “sparring ” and dae ryun was almost all full contact.  During this time, Korea was a country being rebuilt from the war and oftentimes “fists were faster than law”.

Of course I had to ask Dr. Kim if he could share some stories of his adventures…

One day, Dr Kim was riding the Bus with his wife, whom at the time was 30 years old. At the next bus stop a group of thugs were loitering around and one boarded and tried to snatch his wife's purse.  Dr. Kim instinctively jumped off the bus and knocked out the robber with one blow.  The others saw what happened and ran away.  This was known as “Ill Kyuk Pil Sal” (일격필살)  or better known as “one shot one kill”.

I asked if hand and body conditioning were required as part of the Moo Duk Kwan training curriculum.  However, to confirm what I have heard in the past, there was no requirement, but everyone religiously trained in conditioning their hands and feet.  It was a necessity to survive at the time.

On another occasion, when Dr Kim was 50 years old, a gang of thugs was looking for trouble at another bus stop.  Dr Kim got off the bus and told his wife to go home first without him.  Typically wives would not want their husband to get in altercations and leave them alone, but she did not hesitate and left him with the thugs.

This must have been a common occurrence that she didn’t' even give it a second thought knowing Dr Kim could handle himself. And so when Dr Kim got off the bus, he grabbed one of the thugs so hard by his belt, it almost snapped his back.  He even apologized and made sure he was ok.

When Dr Kim was in college, ( he is a Pharmacist by trade) he lost his father who was 49 at the time and had to take care of 5 of his siblings.  He couldn't attend any Moo Duk Kwan classes because he didn't even have money for a uniform.  However, one of his friends and college mates Woo Suk Myung (우석명) gave him a used uniform.  Through Dr. Woo's generosity and compassion, Dr Kim was allowed to start his education in the Moo Duk Kwan.

The Moo Duk Kwan gave Dr Kim much more than flying fists.  The philosophy and principles of the reverence for life, even an enemies, gave him a purpose and great sense of pride in life to help others.

He remembers how difficult a life he had before the Moo Duk Kwan and wants to share it with others. 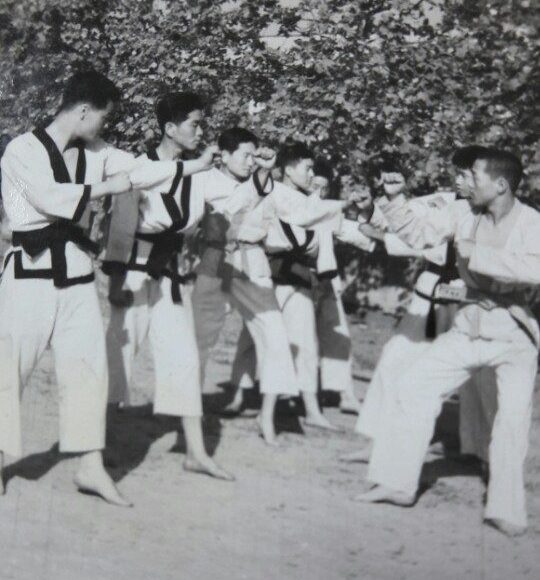 When Dr Kim returned from military service, the Tae Kwon Do movement nearly decimated all Moo Duk Kwan schools that Dr Kim thought Moo Duk Kwan died and Tae Kwon Do took over.  At this point he applied his teachings and focused on becoming a champion speed skater and eventually became a pharmacist operating two locations.

Dr Kim lives in the Young San-Gu  area and for the longest time, always ate dinner at the same Korean Restaurant adjacent to the current Moo Duk Kwan Headquarters in Korea – Joong Ahn Do Jang.  However, since the school is in the back streets of the alley, he had never noticed the school was there.

Until, by chance, one day (four months ago) he arrived early to meet up with a colleague for dinner and decided to walk the back streets.  To his surprise, he saw the Moo Duk Kwan writing in front of the Do Jang and forgot all about his friend and went upstairs right away to find Masters Choi Eui Sun and Kim Jin Bae SBN sitting in the office.  At this moment he immediately broke out in tears.  He was reconnected for the first time in over 50 years back with the Moo Duk Kwan that he so highly revered.

During the last Korea Ko Dan Ja Shim Sa held in Ganghwa Do, from October 7-13, 2016 Dr Kim made a speech after the final presentation on the last day.  He told everyone the story about how he lost and refound Moo Duk Kwan.  He pledged he will dedicate the rest of his life to give back to the Moo Duk Kwan and be our current Kwan Jang Nim H.C. Hwang's “right hand man.”  His speech was so heartfelt that it brought almost the entire room to tears.  I admit, I cried as well.

Dr Kim has already donated funds to fix the roof and floor of Korea Moo Duk Kwan Headquarters.  I am so proud to be a part of the Moo Duk Kwan which has touched so many lives.  I was so moved by Dr Kim's story that I was compelled to interview him and write this article in hopes it will motivate and inspire us to give back to the Moo Duk Kwan in any way we can.

This site uses Akismet to reduce spam. Learn how your comment data is processed.

We use cookies to ensure that we give you the best experience on our website. If you continue to use this site we will assume that you are happy with it.Accept